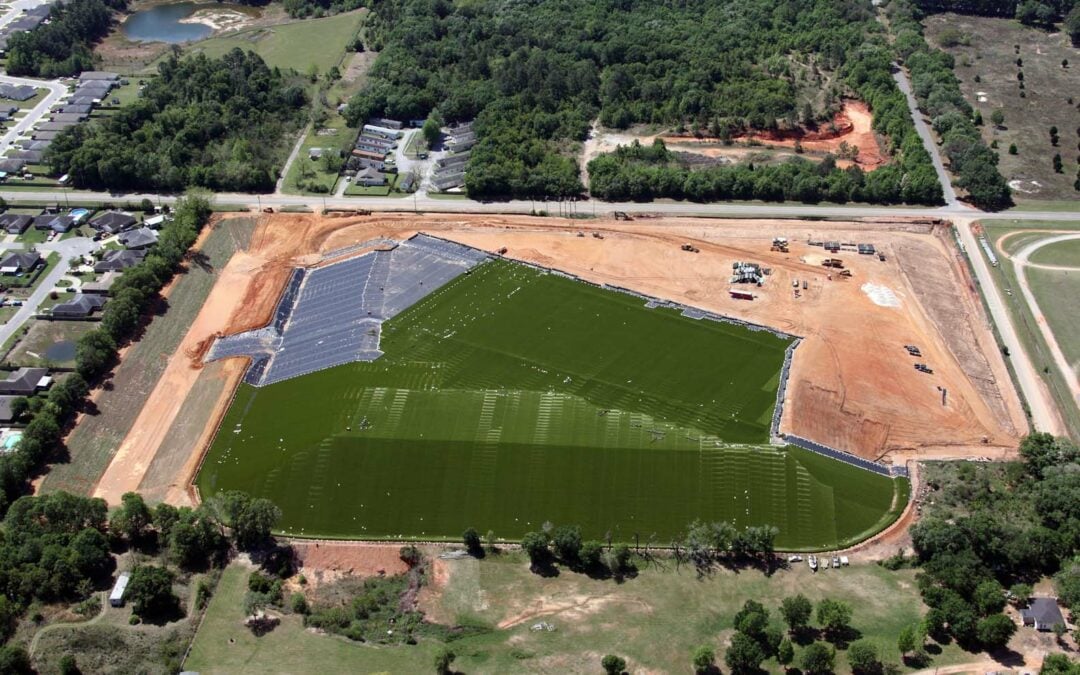 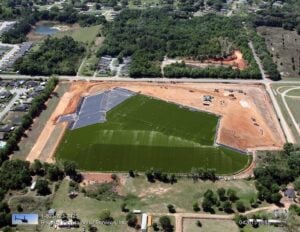 After inheriting the remains of Saufley Landfill, a 23-acre landfill known for its potential dangers and environmental hazards, the County of Escambia was challenged to eliminate several issues related to the official closing and capping of the site.   Opened in 1990 and closed to the public in 2006, Saufley Landfill was labeled as an environmental risk to neighboring communities because of its questionable contents, risk of groundwater contamination and sliding slopes that made nearby roadways impassible.   Constant complaints of odors, dust and smoke piled up as the county continued to struggle with an effective resolution.   Local residents were quoted saying things such as, “It was pretty bad on the smell, stink and all.  And the fires, that smoke sometimes was really bad.”  Some even taped up their doors and windows to avoid the dust and fumes.

Fast forward seven years, and the community has an entirely different outlook.    After much researching the county approved ClosureTurf™ as an alternative closure system to the traditional soil cap system known for eroding slopes and constant maintenance.  Consisting of an engineered system of an impermeable geomembrane layer underneath for drainage and friction, high-strength polyethylene yarn synthetic turf on the surface for durability and aesthetics, and sand infill for longevity and protection from heavy equipment traffic, ClosureTurf™ was specifically designed to improve upon the performance of costly traditional vegetation covers.    It permanently caps the landfill to seal in disposed garbage, control gas emissions, keep the storm water runoff clean for the local community and provide a pleasing “green” appearance to the site.  Maintenance costs are dramatically lowered over the lifetime of the product, which has the potential to last over 100 years if maintained properly.

“It’s creative, it’s innovative, it’s thinking outside the box and for the Florida DEP to let us take part in this alternative procedure is very exciting,” said Pat Johnson, Director of Solid Waste Management for Escambia County.  “There will be a lot of eyes on this for sure.”

Recently, they were able to see firsthand the performance of the product.  Just weeks after installation, the landfill experienced a heavy rainfall of approximately 4.5 inches in less than one hour.  According to the site engineer, there were no slope failures or significant erosion to report—which is virtually unheard of with most landfills that are subjected to that level of rainfall.

“The ClosureTurf™ system withstood the rain even much better than the conventional soil closure system as demonstrated at a nearby landfill that experienced the same type of rain event”, said Jason Lashley, consulting engineer for Saufley.  “The neighboring soil-covered landfill showed considerable erosion and sedimentation runoff.  The maintenance costs associated with repairing the ClosureTurf™ system are much less than that of the soil closure system.  Typically, the repair costs for ClosureTurf™ can be 15 to 20 times less than the repair costs of the conventional system after a rain event as severe as or worse than the one described above.”

While the county will reap the financial benefits from the new system throughout the next several years, everyone agrees the improvement of health and safety for the surrounding neighborhoods is the happy ending to an almost impossible situation.