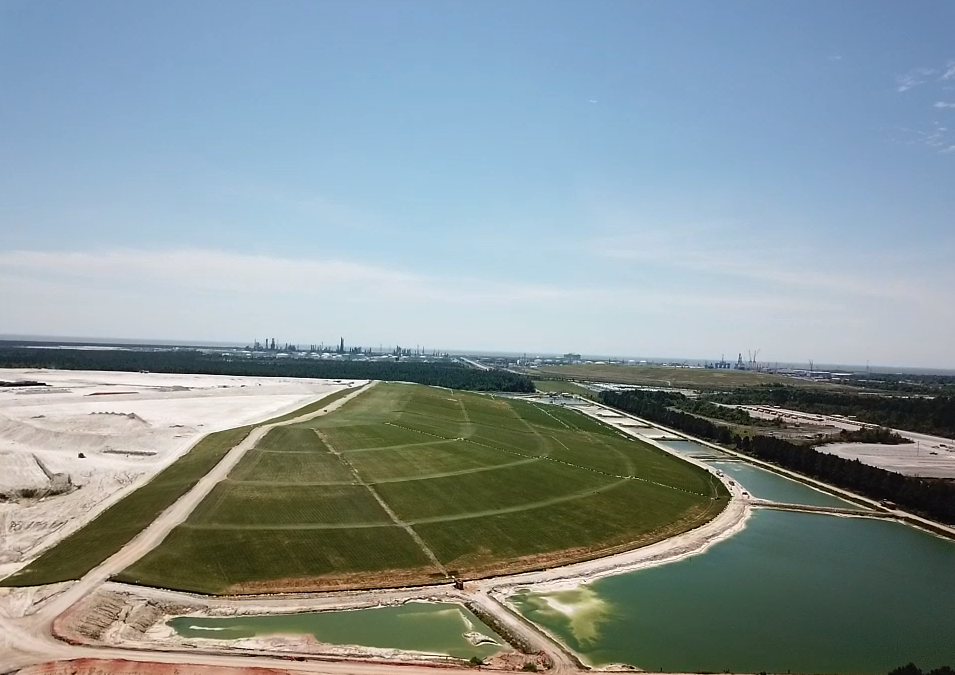 While so many current events are having negative impacts in the world in which we live, Watershed Geo is celebrating the recent closure of the first phase of the Mississippi Phosphates Superfund Site.  Previously an environmental liability for the EPA that threatened one of the most biological productive estuaries in the region, the initial phase is now safely closed with a predictable, community-friendly solution that will last for years to come.

Mississippi Phosphates, a former diammonium phosphate fertilizer plant in Pascagoula, MS, went bankrupt in 2014.  Because of dangers to the community, the EPA, who inherited the site in 2017, was on a mission to close the deemed superfund site as quickly as possible.

The EPA considered multiple closure options with the goal of providing the most environmentally sound and economical solution for the U.S. taxpayers.  After thorough review by the EPA and their outside consultants, the solution selected was an innovative approach that has been used on other solid and hazardous waste sites throughout North America (shown below).

In June 2020, phase one of the first three phases of the project was completed with a unique closure technology called ClosureTurf®.  Phase I consisted of closure of the East Gypsum Stack Ponds 3 and 4 and stack slide slopes.  The ClosureTurf technology took half as long to install than a traditional vegetative cover.  This was especially important because for every inch of rainfall, there are about 9 million gallons of treatment required for the entire landfill.  Closing faster meant reducing potential risks and saving more taxpayer money.  Closure of Phase 1 of the project is already eliminating rainwater contact on 54 acres, thus greatly reducing water treatment costs for that area.

All landfills are regulated under EPA’s Resource Conservation and Recovery Act (RCRA), commonly referred to as “Subtitle D” (Solid waste) or “Subtitle C” (Hazardous waste). These regulations require an impermeable membrane that is welded together to keep rainwater out and odors and gases in.  In the past, a traditional closure design usually incorporated two feet of dirt on top of the membrane with the hopes that vegetation would take root and hold the walled landfill structure in place.  This design approach can be unpredictable and has a high risk of erosion during weather events. Slopes can fail under these conditions and not just once.  Without constant maintenance, failure can occur multiple times on the same slope.  Post closure operational budgets are often high due to the headache of trying to keep grass and dirt in place during routine maintenance and with unplanned significant repairs after major storm events.

This composite system that makes up ClosureTurf eliminates borrow soil, reduces construction time, and provides many geotechnical and environmental benefits that make sense for the maintenance of the post closure life that an owner is responsible for. Typically, maintenance activities are reduced by around 90%. ClosureTurf also protects against weather events such as heavy rains, hurricane-force winds, blizzards and earthquakes.  As a geographically diverse solution with predictable and reliable high performance, ClosureTurf has survived many such events with no damage. In addition, the engineered turf and infill help filter clean storm water runoff, and the elimination of soil, grass fertilizers and chemicals aid in keeping debris and contamination from leaving the closed site.  In the case of Mississippi Phosphates, the EPA had more than 700 million gallons of acidic, nutrient rich wastewater stored at the facility.  A lot of risk existed to keep seepage and debris from entering nearby water sources. On June 7, 2020, just days after completion, the Mississippi Phosphates’ site was hit with its first major storm event, Tropical Storm Cristobal.   It brought high winds and around 11 inches of rain1 to Pascagoula. At peak intensity, it reached over 3 inches/hour.  The site experienced no damage or erosion after the storm event with ClosureTurf. It also reduced about 14 million gallons of water treatment (approximately $146,000) for just that one event.  The impressive performance under events like these has led the EPA to look at using ClosureTurf on multiple future closures. BEFORE STORM CRISTOBAL

The second phase of the Mississippi Phosphates project is now underway with an expected completion by year end.  The entire project, when completed, will eliminate a carbon footprint of 139,000 truck trips, avoid stripping over one million cubic yards of soil from neighboring land and save an overall $6 million dollars in installation and operation costs.  Because of the performance of ClosureTurf to date, the EPA has recently made the decision to close an additional 130 acres with ClosureTurf previously designed to close with traditional vegetation. The Mississippi Phosphates site is the second Superfund site to use ClosureTurf.  Crazy Horse Landfill in Salinas, California, previously listed as a Superfund site, was closed in 2013 with ClosureTurf as the Subtitle D final cover system.  The closed site totals 68 acres and is still performing without any erosion to date.

ClosureTurf is a proven superior replacement of the traditional closure design.  It is becoming the new standard and BMP (Best Management Practice) for closures. Because of its benefits, it is being used in the waste industry from the smallest of MSW sites to large hundred-acre industrial and utility sites.  With over 2,500 acres in place, new technology is replacing old and making vegetated caps a thing of the past. About Watershed Geo Watershed Geo is an environmental and civil solutions company offering a broad range of products for landfill management and erosion control. Through best-in-class materials and extreme engineering, Watershed Geo products deliver improved performance and reduced environmental impact while limiting the long-term costs associated with landfill management and revetment projects. The company is headquartered in Alpharetta, Ga. and can be found on the web at WatershedGeo.com and on LinkedIn .