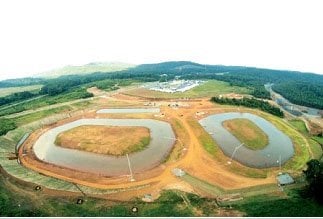 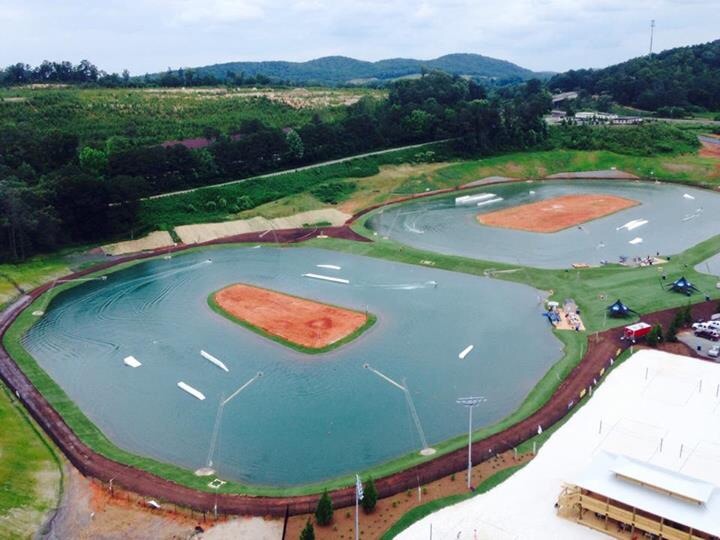 Introduction
The newly opened Terminus Wake Park is located within the LakePoint Sporting Community and Town Center Complex in Emerson, Ga., just off Interstate 75, about 30 miles northwest of Atlanta. This park represents one of the latest examples in a growing trend in extreme sports—cable wakeboarding—where wakeboard riders are pulled, not by a boat, but by a moving cable system suspended by towers surrounding a lake.

While wakeboarding parks are a relatively new concept, they face a familiar civil engineering challenge—controlling erosion of the lake banks specifically from wave attacks created both by wind and the wakeboard riders. The Terminus Wake Park chose to address this challenge with a geosynthetic/synthetic turf revetment system. This technology uses engineered synthetic turf with an integrated heat- welded polyethylene geomembrane that is then infilled with a high-strength, cementitious material.

The first lake, about 1 acre, is a “beginner” pond designed to introduce newcomers to wakeboarding. The second lake is approximately 5 acres and is designed to develop a wakeboarder’s abilities through increased experience and exposure to jumps, rails, and other stunts. The third lake, about 7 acres, is for advanced participants and will serve as the site for national and international wakeboarding competitions.

The wakeboarding park is located within the LakePoint Sporting Community, a destination resort for sports activities including baseball, soccer, lacrosse, volleyball, softball, and others, spread across more than 1,300 acres.

The nature of the design for the wake park’s three ponds offered several challenges. Controlling erosion on the banks and turbidity prevention from the Georgia red clay were the top priorities, but other issues required attention. For example, wakeboard riders entering and exiting the water needed to navigate the banks comfortably and safely. Also, the park’s high-profile location within the LakePoint facility meant that aesthetics would be important. Finally, maintenance of the protection system had to be minimized. After all, a lake that is shut down while the banks are being maintained means that no one is able to wakeboard-bad news for Terminus and its clients.

Solution, evaluation, selection
The potential for erosion on the banks of the three wakeboarding ponds was significant. The reality of wakeboarders circling in the waters continuously for 8-12 hours per day, year-round, plus the potential for wind-driven waves, meant that wave attacks on the banks would be an almost daily occurrence.

Traditionally, wave-attack erosion applications are treated with some form of hard armor, such as rock riprap, concrete lining, or articulated concrete blocks (ACB). Each of these methods has its relative strengths and weaknesses, and each was considered for protecting the pond banks at Terminus. While each could work, there were some undesirable or unacceptable caveats-maintenance, aesthetics, financial, or some combination of these.

But the synthetic turf option that was presented to the project stakeholders appeared to provide all of the positive attributes of the traditional methods with none of the limitations. This technology is an integrated, geomembrane-backed, fiber-reinforced, concrete lining system. It includes engineered synthetic turf, integrated with a polyethylene geomembrane to eliminate water intrusion onto the subgrade and increase subgrade interface friction.

Once in place, the turf is then infilled with a dry cementitious mix that includes a 5,000-PSI, thin-set concrete technology, a dust suppressant, and a color additive that can be customized to match existing soil conditions. When the infill is in place, it is hydrated and

begins curing immediately. The integrated polyethylene geomembrane keeps water off of the subgrade. The 5,000-PSI binder infill serves both as ballast and as impact and scour protection for the system.

The engineered synthetic turf is also dual-purposed-an aesthetic value with realistic-looking turf grass as well as a functional value with continuous fiber-reinforcement and substrate anchoring for the cementitious infill. The team at Terminus selected a 100% green fiber turf.

Upon introduction to this new system, the Terminus team evaluated it. Consistent with the approach taken with the more traditional hard armor solutions, the first analysis was evaluating the system’s suitability for controlling erosion of the banks from wave attacks.

Hydraulic testing was conducted at the Hydraulic Laboratory/Engineering Research Center at Colorado State University (CSU) in Fort Collins, Colo. These tests were conducted: steady state hydraulic testing, including steady state overtopping, hydraulic jump, heavy debris load (impact and abrasion), and intentional damage. In addition, wave overtop testing for levee landward-sideslope protection, and again intentional damage, but in a wave overtop condition, was conducted. In all tests, the full-scale flume and wave overtop flume were run to their maximum capacity and the performance threshold of the system was not realized. Specifically, no erosion or instability of the system was observed at any time either during or upon completion of any of the tests.
Of specific interest to the Terminus team was the performance of the system in the steady-state hydraulic jump and wave overtop testing. CSU calculated energy dissipation results of the system in the hydraulic jump test at 120 horsepower. Figure 1 illustrates the relationship between the power dissipation of the system as a function of the specific energy at the entrance to the hydraulic jump. Since there was no instability and no erosion of the subgrade, this value and curve are not maximum limits of energy dissipation for the system; they simply represent the maximum capacity of the testing facility. In addition, the system was tested for 13 hours in the CSU wave overtopping simulator, up to the maximum overtopping flows of 4ft3 per second per foot for a cumulative total volume of 165,600ft3 per foot. Given the fact that this maximized test volume equates to a generic 500-year hurricane event in New Orleans, La., the team determined the system was fully capable of providing the necessary protection of the banks from wave attack.

With the question of the technical suitability answered to its satisfaction, the Terminus team next addressed accessibility and safety, particularly walking on the surface while entering and exiting the wakeboarding ponds. Two concerns were raised: (1) Would the synthetic turf surface be too slippery for safe accessing, especially since the finished slopes were estimated to range from 4:1 to 6:1? (2) Would the cementitious infill be too hard or too abrasive, or both, for bare feet?

To evaluate these concerns, a 20ft × 30ft test section was installed at the Terminus site. The installation was placed directly on a bank of lake 3. The water level was then raised to simulate real-world conditions as closely as possible (Photo 3). The issues of accessibility and safety were resolved-the synthetic surface was neither too slippery nor too abrasive.

In addition, the sample plot provided the Terminus team the opportunity of assessing the aesthetics of the system., an aforementioned selection criterion. The result: the synthetic turf system not only exceeded the aesthetics of the other traditional hard armor solutions, but would serve the prominent location within the LakePoint complex most effectively.

Design and construction
Now that the final bank protection material was selected, the design could be updated and installation was inserted into the construction schedule.

With three ponds, a phased approach to the construction schedule was arranged. Lake 2, the intermediate-level lake that was on the southernmost side of the Terminus site, was first. Once the lake was dewatered and the subgrade was allowed to dry, the banks were graded to final elevation.

There were small islands in the center of both Lakes 2 and 3. The turf system installation included the outer banks of these two ponds as well as the island banks in each (see Photo 2).

Once the banks were at final grade, smoothing and finishing the subgrade was completed. The roll size of the material used on this project was 12ft × 300ft. At the bottom of the banks, the system was anchored in an anchor-termination trench measuring 1ft × 1ft. The location of the bottom trench was below the minimum design water depth to prevent erosion of the unlined lake bottom from potential headcutting underneath the synthetic turf armoring layer. At the top of the banks, the system was anchored in a 6in. × 6in. anchor trench.

Both the bottom and top anchor trenches were filled with grout. Seams between adjacent 12ft roll-widths were overlapped by 4-6in. and sealed with heat-welders and hot-air blowers. Both the engineered synthetic turf material and the coating on the back of the system are polyethylene, making it relatively easy to achieve an effective, water-resistant heat-bonded weld between the materials.

The installation was sequenced so all of the turf installed each day would also be infilled with the cementitious material the same day. The corresponding anchor trenches were filled with grout, minimizing potential problems due to weather changes or sudden storms. Average installation rates varied depending on weather and labor, but typically fell within the range of 10,000-20,000 square feet per day (see installation photos 1, 4–7).

Once the crew completed work on Lake 2, it switched to Lake 1, the beginner’s training lake. The configuration of this lake was different from the other two. Instead of being oval-shaped with an island in the center, this lake was long and thin, with approximate dimensions of 90ft × 350ft.

Where the cable movement of the other two lakes involved continuous, clockwise rotation, this lake allowed for movement either south-to- north or north-to-south, but not both at the same time. The bank treatment for all three lakes was largely the same, albeit the depth of Lake 1 was somewhat shallower than that of Lakes 2 and 3 because of the less aggressive activities planned for this lake.
Total material installation was approximately 200,000ft2-Lake 1, 20,000ft2; Lake 2 and island, 60,000ft2; Lake 3 and island, 70,000ft2; and 50,000ft2 for the two man-made isthmuses between Lakes 1 and 3 and between Lakes 2 and 3. The result was an attractive, durable, and virtually maintenance-free armoring system that supports barefoot traffic comfortably.

Conclusions
While cable-pulled wakeboarding parks may be a relatively new phenomenon, bank protection from wave attack has been a civil engineering challenge for a long time. Historically, tradeoffs have been made among performance, economics, aesthetics, and maintenance in selecting a solution for treating this common application challenge. The Terminus Wake Park showcases a project in a new era where these tradeoffs are no longer necessary.

Paul O’Malley is vice president of sales at Watershed Geosynthetics. 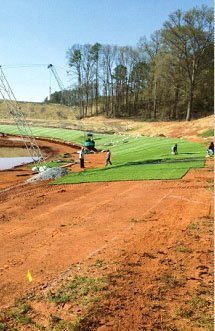 PHOTO 2 Terminus Wake Park prior to subgrade prep and dewatering, looking east. Lake 2 is on the right, Lake 3 is on the left, and Lake 1 is just beyond Lake 3. 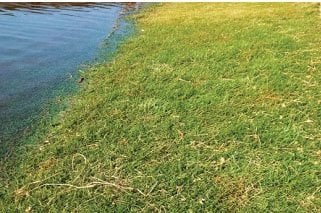 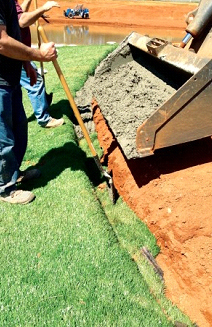 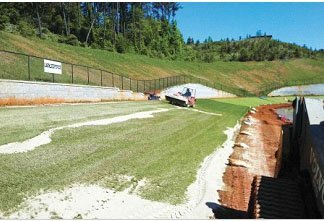 PHOTO 5 Grooming the binder material infill into the turf. 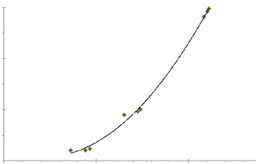 FIGURE 1 Power dissipation as a function of specific energy at the entrance to the hydraulic jump for HydroTurf (Hydraulic Laboratory/Engineering Research Center, Colorado State University). 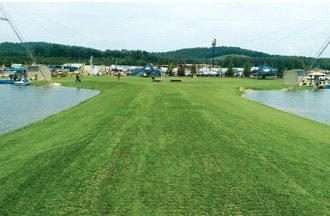 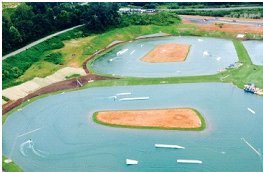