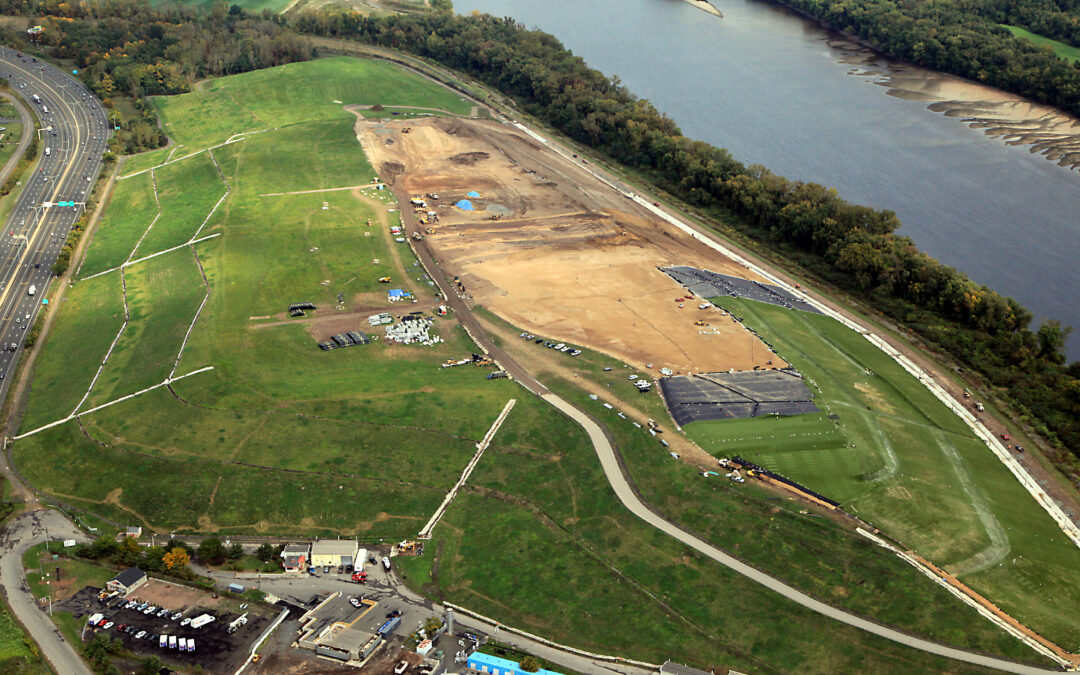 The Connecticut Resources Recovery Authority (CRRA) culminated the final phase of the Hartford Landfill closure, completed in June 2014, with a 40-acre cap utilizing ClosureTurf, a revolutionary three component erosion control closure system, topped by six acres of solar panels. After a 73-year existence as an “eyesore,” the state-owned landfill is now an example of innovation in renewable energy for future landfill closures in Connecticut and across the nation.

“When we began working with the City of Hartford on the future of the landfill, we wanted to find innovative ways to use the land,” said Thomas D. Kirk, CRRA President. “Solar energy was an idea we all agreed on right away.”

The complexity of designing plans for closure—and the subsequent impressiveness of its successful completion—existed in finding a landfill closure system with a membrane compatible to installing solar PV panels atop the turf. CRRA reviewed various closure systems to identify a product membrane best suited for its specific needs.

Enter ClosureTurf™, a durable system that allows for a multitude of post-closure uses with easy accessibility and clean surface having little maintenance. “Solar panels on top of a landfill, is an extremely beneficial re-use of typical dead space when a landfill is closed. The ClosureTurf system makes solar a very viable option since the panels are located in a remote place over large areas which allows the opportunity for installation of a large number of solar panels (making it easier to reach critical scale in megawatts installed) with very minimal maintenance,” said Mike Ayers, President of Watershed Geosynthetics.

Developed by Watershed Geosynthetics, ClosureTurf consists of an impermeable geomembrane layer, engineered turf, and sand infill. This system ensures durability, longevity ,and the elimination of drainage and odor.

In addition to these benefits, CRRA ultimately chose ClosureTurf over other options for the following specific components, according to the State’s closure review summary:

With the completion of the installation, the Hartford Landfill is now the first in the state of Connecticut—and one of few in the nation—to be transformed into a renewable energy source through the generation of solar power.

Collected energy will be sold to the regional power grid in Connecticut. The CRRA plans to generate enough megawatts to power more than 1,000 Hartford homes. When the closure project is completed, the entire 96-acre landfill will be encapsulated with ClosureTurf.

Watershed Geo is an Atlanta-based geosynthetic company specializing in engineered products that solve earth’s greatest challenges with solutions that reduce risks, require virtually no maintenance, and stand the test of time that far exceed the performance of traditional methods through the highest levels of testing. Through best-in-class materials and extreme engineering, our goal is to unearth solutions that eliminate plaguing industry issues, while delivering more aesthetically-pleasing and effective results. The company’s in-house polymer scientists, geotechnical engineers, and hydrologists have worked with multiple universities and private research labs to achieve unprecedented performance for its products.

Watershed Geo’s stable of products include:

For more information about Watershed Geosynthetics and its products, visit: https://www.watershedgeo.com.

The City of Hartford opened the Hartford landfill in 1940. In 1982, CRRA leased the landfill from the City and deposited trash there until it opened its Hartford trash-to-energy plant in 1988. Between 1988 and Dec. 31, 2008, CRRA delivered ash from the plant and waste that the plant could not process. CRRA began closing and capping the landfill in 2007, shortly after the Connecticut Department of Energy & Environmental Protection issued a permit to begin that work and more than a year before the landfill accepted its final truckload of waste. In 2011, CRRA applied for, and DEEP approved, a permit modification to allow the installation of solar collectors. In 2012, the project was selected to receive zero-emission renewable energy credits, or ZRECs, which will be sold to Connecticut Light & Power. The ZRECs add 11 cents per kilowatt-hour to the price of electricity generated by the solar collectors. The cost of the project will be covered by a CRRA reserve dedicated to the cost of closing and capping the landfill.

When the closure project is completed the entire 96 acres will be encapsulated in a synthetic geomembrane. The six-acre solar field will sit atop a layer of sand and a layer of ClosureTurf TM, an impermeable synthetic grass designed for covering landfills, while the remainder will be covered with soil and appropriate vegetation. The cap will leave intact the landfill’s environmental-protection systems, including its gas-collection system that virtually eliminates odors while using the methane created by decomposing waste to generate about 1.3 megawatts of power.

For more information about CRRA and its activities, visit http://www.crra.org.