Terminus, the first occupant of the massive LakePoint Sporting Community & Town Center Complex in Emerson, GA, is a cable-pulled Wake Boarding Park with three different lakes available to the public. Each of the three lakes features the patent pending HydroTurf Technology, a state-of-the-art engineered synthetic turf system that contains HydroBinder®, a 5,000 psi cementitious infill, around the banks and shorelines. 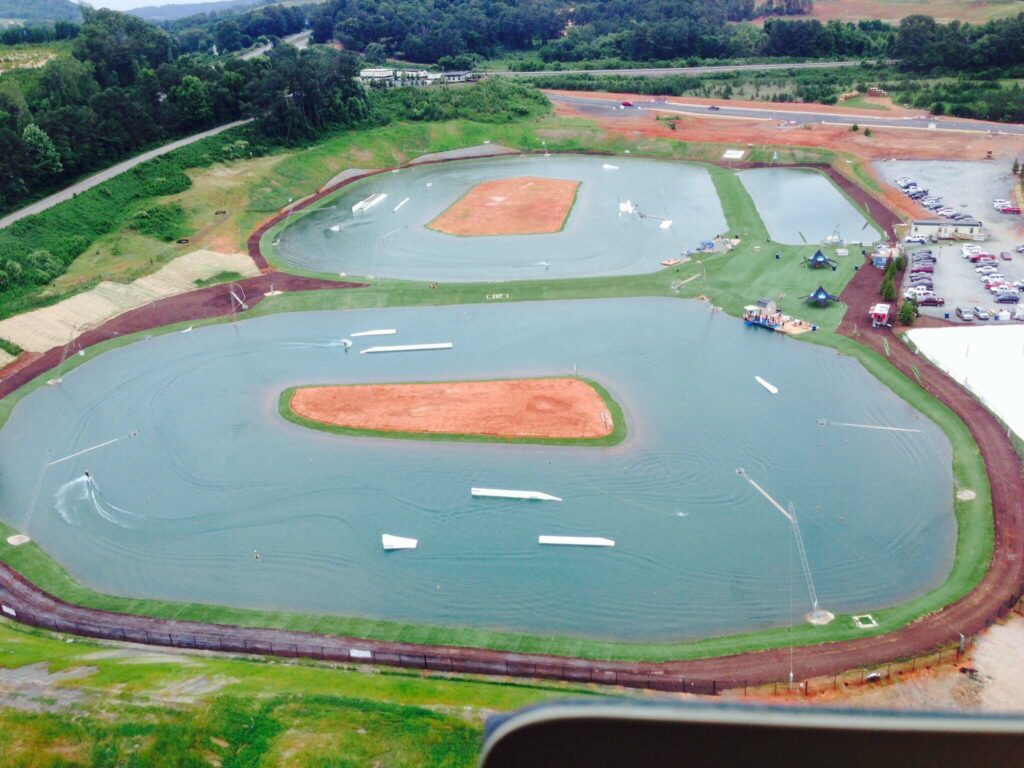 HydroTurf is a patent pending advanced revetment system created by Watershed Geosynthetics. It is uniquely designed to offer both the environmental and aesthetic benefits of vegetation as well as the performance and maintenance benefits of hard armor.
HydroTurf eliminates shoreline erosion by maintaining the slope of the shoreline area while absorbing the energy of the waves without washing away the underlying soil. It also reduces turbidity from the Georgia red clay soils allowing for cleaner, clearer lake water. Because of the synthetic turf, the area stays lush and green for longevity and aesthetics. Maintenance including mowing or reseeding due to heavy foot traffic is eliminated.

“In the case of the Terminus Wake Park, we were specifically looking to address wave attack protection and overall aesthetics since it isl a five-star, heavily visited destination in the state of Georgia,” said Brad Cooley, Vice President of Civil Applications for Watershed Geosynthetics. “By offering superior erosion control, pointedly less turbidity and significantly less maintenance, HydroTurf eliminated the headaches and costs that can come with both traditional vegetative erosion control systems and hard armor.”

With two full six-station Sesitec Cable Systems and System 2.0 lake, the park’s signature is an elaborate series of park features and sliders. Many of the features are not available anywhere else in the United States and the custom features are the first of their kind in the world. Being that Terminus is a best-in-class wake park, they wanted to be the first to feature the HydroTurf Advanced Revetment Technology.

“In creating this facility, we’ve set out to build and operate one of the finest cable wakeboard parks in the world,” said Chase Andrews, General Manager of Terminus. “HydroTurf certainly added to the innovation and uniqueness of the park. We are looking forward to reaping the benefits of less maintenance.”

“We are very pleased with the results of HydroTurf™,” said Austin Singleton, Terminus Owner. “Most people don’t even recognize that it’s not real grass. And that is exactly what we were hoping for.”

Terminus Wake Park is now open to the public!

Based in Alpharetta, GA, Watershed Geo is an Atlanta-based geosynthetics company specializing in engineered products that solve earth’s greatest challenges with solutions that reduce risks, require virtually no maintenance and stand the test of time that far exceed the performance of traditional methods through the highest levels of testing. Through best-in-class materials and extreme engineering, our goal is to unearth solutions that eliminate plaguing industry issues while delivering more aesthetically-pleasing and effective results. The company’s in house polymer scientists, geotechnical engineers and hydrologists have worked with multiple universities and private research labs to achieve unprecedented performance for its products. Watershed Geo’s stable of products include:

Build it. Ride it. Share it.
From the very beginning, the team at Terminus set out to build one of the largest and most unique cable parks in the United States. In creating this facility, we’ve set out to build and operate one of the finest cable wakeboard parks in the world. With two full six-station Sesitec Cable Systems and System 2.0 lake, the park’s signature is an elaborate series of park features and sliders. Many of the features are not available anywhere else in the United States and the custom features are the first of their kind in the world.

WHY CABLE?
Cable parks are the most effective way for beginners, intermediate and high ability riders to get out on the water! It’s a great way to introduce new riders to the sport of wakeboarding and a very economical alternative to the tremendous investment required for boat ownership and high gas prices.

Location:
Terminus Wake Park is located at: 130 Old Allatoona Rd Cartersville, GA 30121
*GO WEST OFF OF EXIT 283 FROM I-75, right next to the Love’s Gas Station