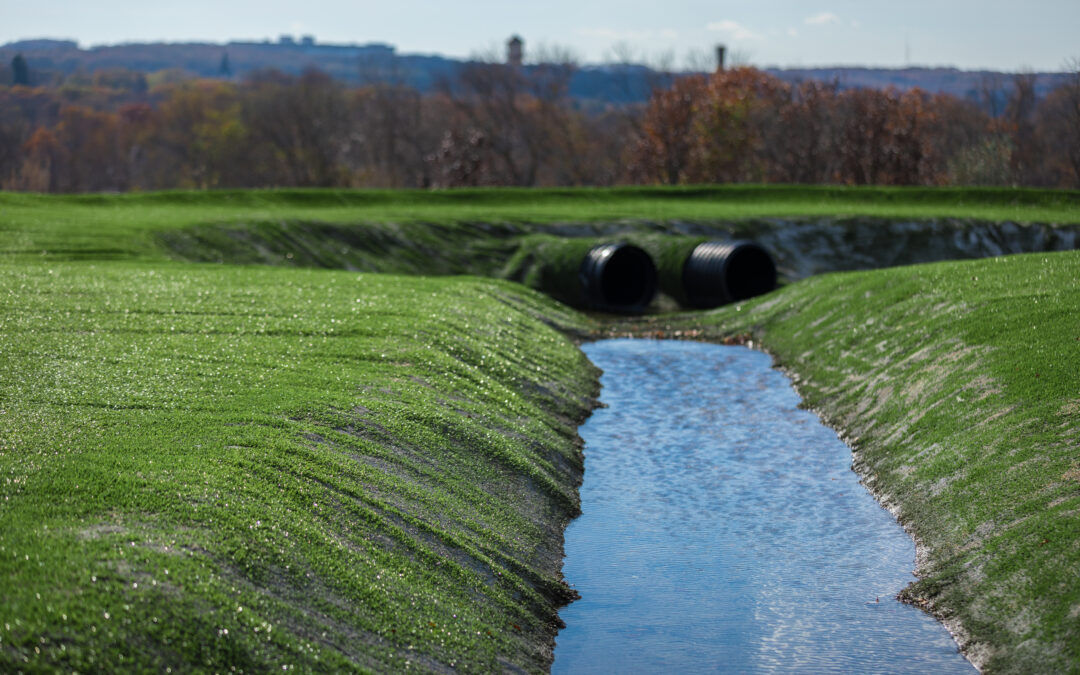 In its tenth year of in-ground performance, ClosureTurf has proved its ability to solve erosion challenges for landfill final covers.  To date, over 2,000 acres have been installed and are performing successfully around the country even in areas where extreme weather has hit.  HydroTurf®, Watershed Geo’s advanced revetment system for high velocity applications such as channels, dams and levees, has also faced off with mother nature.  Watershed’s technologies have been tested and subjected to significant, if not historic weather events including, hurricanes, extreme rainfall, flooding, high winds and harsh winters. These technologies have held up under conditions that would result in complete washout, failure and rebuilding of traditional solutions. With weather continuing to pummel many parts of the country, let’s look at some specific examples at how these technologies are performing.

Tested to the Max

Several tests and simulations have been completed by third parties to ensure the performance of ClosureTurf and HydroTurf.

Wind tunnel testing was conducted at the Georgia Tech Research Institute, Iowa State University, and Florida International University to evaluate the wind uplift of the engineered turf.  The turf was shown to have unique aerodynamic features that reacted against the wind causing a resistance to the uplift component.   The measured uplifting force was less than the weight of the turf and changed to downward force as the turf blades bent towards the ground by wind.  It was shown to resist a hurricane-force wind of 120 mph with no uplift. In real world experience, it has been put to the test at locations along the Atlantic and Gulf Coasts with major storm events such as Hurricanes Florence, Irma, Matthew, Michael and Dorian with no uplift or damage.

University’s steady state flume testing facility, the largest of its kind in the world, the system performed at a flow velocity of 40 ft/s which is the maximum velocity generated by the flume. This testing resulted in no instability or damage of HydroTurf, and no erosion of the underlying subgrade soil. This test alone proved that the system outperforms most traditional revetment systems, such as riprap, articulated concrete blocks, gabions, concrete pumpmat, etc.

HydroTurf is also used in levee applications where large storm surges can cause failure and excessive flooding.  HydroTurf was tested and withstood the largest wave overtopping flows of 4 ft3/s/ft (0.37 m3/s/m) that could be applied by the CSU Wave Overtopping Simulator.  These flows are the most energetic wave overtopping conditions that can be produced in any existing wave overtopping experimental facility.  They represent a generic 500-year hurricane (0.2 percent annual exceedance probability) in New Orleans, LA.  The testing continued for a total of 13 hours with HydroTurf being subjected to 165,600 ft3/ft (15,393 m3/m) of cumulative water volume.  No other known revetment has been tested for 13 hours and 165,600 ft3/ft of cumulative flow.

Examples of Projects that Have Undergone Real Storm Events

Below are a few examples of how actual Watershed projects have performed under severe conditions.

During the historic precipitation in Pensacola, FL, in 2014, ClosureTurf proved its durability and resistance to heavy rainfall at Saufley Field Landfill. The area experienced rainfall levels of 5.68 inches in just one hour, and between 22-26 inches within 24 hours. According to National Oceanic and Atmospheric Administration (NOAA), this was the greatest calendar day total on record with data going back to 1879.  It was estimated to be a 1-in-500-year event.  No damage was done to the site.

The Berkeley County Landfill in Moncks Corner, South Carolina, is in an earthquake zone and an area susceptible to hurricanes and high rainfall events. On account of the potential for seismic activity and significant rainfall, ClosureTurf was chosen over the traditional soil closure section. In October 2015, an extratropical storm hit South Carolina.  Some areas of the state saw rainfall equivalent to a 1-in-1,000-year event. ClosureTurf was put to the test during the extratropical storm when the area received 26 inches of rain over a couple of days. The surrounding community experienced extreme flooding, significant and costly erosion, and damage including many of the nearby traditional soil capped landfills. At Berkeley County Landfill, there was no damage to the ClosureTurf with minimal maintenance.  ClosureTurf had done exactly what it was designed to do.  Also in 2016, it survived 85+mph winds from Hurricane Matthew with no damage and no required maintenance.

Port Angeles, Washington, is located on the Salish Sea in the Strait of Juan de Fuca. ClosureTurf was chosen as the preferred method for final closure of the Port Angeles Landfill on account of the severe storms and pacific typhoons resulting in heavy rains, extreme winds and snow-covered winters common to the area. In 2016, Super Typhoon Songda hit the Pacific area exposing the Port Angeles Landfill to wind gusts of over 80 mph.  ClosureTurf performed as designed and held up with no damage to the harsh conditions.

Shortly after completion of the Canal C-18 bank project in Palm Beach Gardens, Florida, Hurricane Irma struck the state.  The storm shifted directions at the last-minute eliminating Palm Beach Gardens from the central path of the hurricane.  However, the area still received Category 1 wind gusts and several inches of rain.  Canals in the area filled to the max capacity.  Inspections of Canal C-18 just shortly after the storm proved that HydroTurf had performed as designed.  No maintenance of the HydroTurf system was required.

Two hurricane events since installation demonstrate the superior performance of HydroTurf.  Just two months after installation of the HydroTurf channel improvement project at the Kingsmill Subdivision in Melbourne, Florida, the storm season raged with Hurricane Matthew, a Category 3 event hitting on October 6, 2016.  Even with the heavy rain (peaking around a 50-year storm for the six-hour period and a 25-year storm for the 24-hour period) and 70 mph winds, the HydroTurf channel performed just as designed with no erosion, no damage and no follow-up maintenance required.   A year later, on September 10, 2017, Hurricane Irma put HydroTurf to yet another test.  Although the storm had reduced from a Category 5 to a Category 1, wind gusts still maxed out at 94 mph with 10-inches of rainfall.  The HydroTurf system did exactly what it was designed to do – hold up and prevent erosion under significant hydraulic events.

Most recently, a 70-acre landfill closure was under construction with ClosureTurf when Hurricane Dorian hit Wilmington, NC, on September 5, 2019.  The storm was a Category 2 as it went by Wilmington producing 10 to 11-inches of rain and wind gusts of 75 mph.  ClosureTurf held up very well with no damage to the partially installed system.

ClosureTurf and HydroTurf provide significant technical benefits, including elimination of soil erosion, enhanced geotechnical stability, accelerated construction schedule, and reduced post-closure maintenance. These benefits have been validated through extensive independent laboratory and field tests as well as real-world performance as shown by the above events.