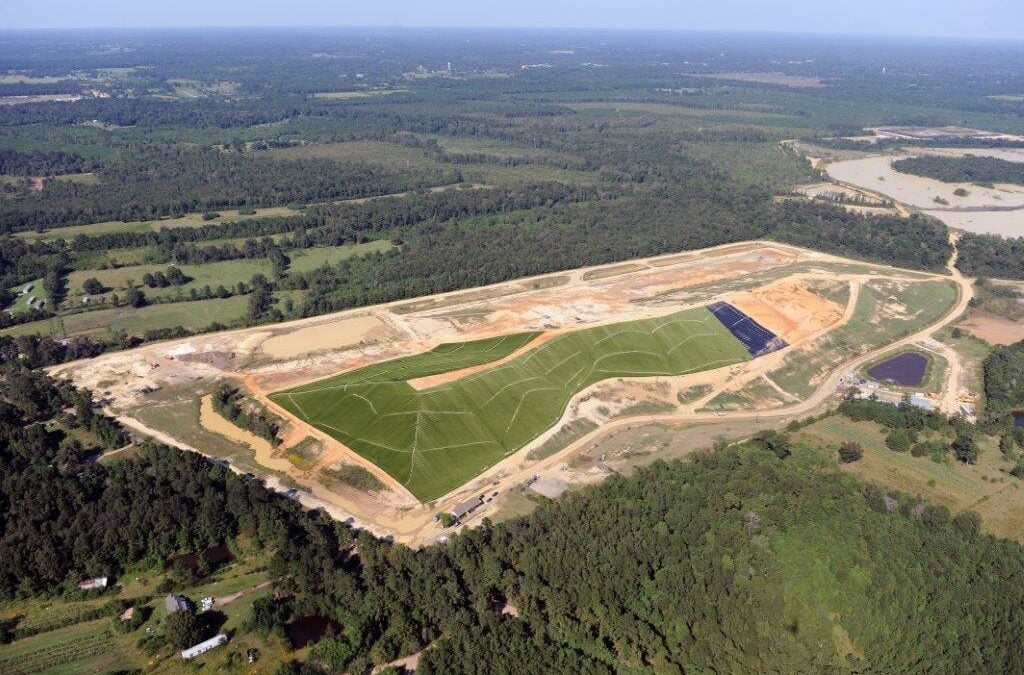 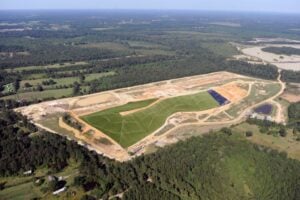 Prior to the closure, the 22-acre landfill was a 180-foot-high mound of waste with steep slopes of highly erodible soil. TPWF was under mounting pressure from the state to find an effective solution after previous failed attempts at resolving problems of erosion with traditional vegetation methods.

“We tried the conventional way, which is clay and topsoil and grass. It didn’t work, so this the next alternative,” said Site Operations Manager, Terrance Stewart.

That alternative was ClosureTurf™, a patented final closure system which meets and can exceed the requirements set forth by the EPA in Subtitle D.

ClosureTurf™ collects gas horizontally through its Surficial Gas System, a process dramatically more effective and efficient than the labor and equipment-intensive vertical system of pipes and wells typically utilized by traditional landfill closure systems. Emissions passively rise to the surface and are collected underneath an impermeable structured geomembrane where they are pulled by a minimal vacuum system for flaring or alternative energy generation. Designed to work as a standalone system or to enhance emission control for conventional wells, this seemingly simple design has increased the amount of gas collected while at the same time decreasing the time and capital invested.

In addition to gas collection, ClosureTurf™ produces major savings in a number of significant elements, including a reduction of borrower soil and overall post-closure maintenance costs.

“We’re anticipating that the actual maintenance that we’ve eliminated will more than pay for what it is going to cost,” said Tangipahoa Director of Finance, Jeff McNeely.

In addition, the engineered turf’s aesthetic appeal has inspired hopes of transforming the landfill into an attraction for Tangipahoa.

“It’s beautiful. I’m kind of trying to talk Burgess into possibly turning it into a vacation spot,” Stewart said.

The landfill’s closure with ClosureTurf™ also meets Title V, which combines all air quality requirements, permits, and compliance elements into one permit.

Acquiring the Title V permit– the highest and single most important regulation in the landfill industry—adds increased prestige to the successful ClosureTurf™ installation at this Independence, La landfill and the Tangipahoa Parish Waste Facility.

ClosureTurf™ is specifically designed to address and solve soil erosion, slope integrity, gas emission, installation and maintenance cost control, EPA regulation compliance, and longevity of structure and appearance. ClosureTurf™ combines a patented AGRU America™ geomembrane barrier/drainage system with a durable engineered turf and specialized sand infill for a long life of superior performance and aesthetics. Shaw Industries, a Berkshire Hathaway Company, partnered with ClosureTurf™ in 2011 to become its exclusive provider of engineered turf. ClosureTurf™ exceeds requirements of EPA Subtitle D and has been approved and installed in many states.