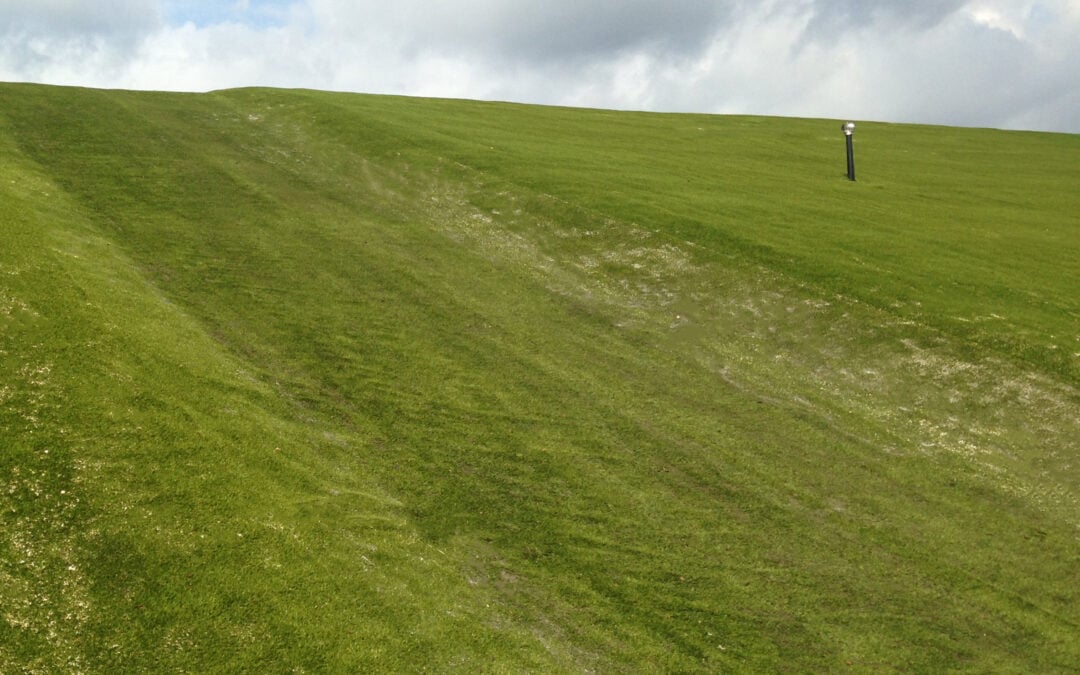 In most landfill closure designs, water flow is directed off the top deck to steep downchute channels in order to prevent erosion and eliminate ponding.  Common materials for these lined drainage channels include rock riprap, concrete lining and drainage pipe.  These materials can be very expensive, time consuming and create obstacles for completing construction.

A failed concrete liner due to differential settlement.

With the settlement of landfills and high water velocities that pass through these channels, cracking of the concrete and rock displacement can occur, eventually requiring maintenance or complete replacement.

HydroTurf® is an innovative, environmentally-friendly alternative revetment to rock riprap and piped channels. It is a patented, three-component system made up of a structured geomembrane, an engineered synthetic turf and a specialized cementitious infill (HydroBinder®). Created specifically for bench drains, downchutes and perimeter channels on landfill covers, HydroTurf will flex and move with typical differential settlements that occur on landfill covers. It provides superior hydraulic performance capable of handling large flows resulting in very high velocities. 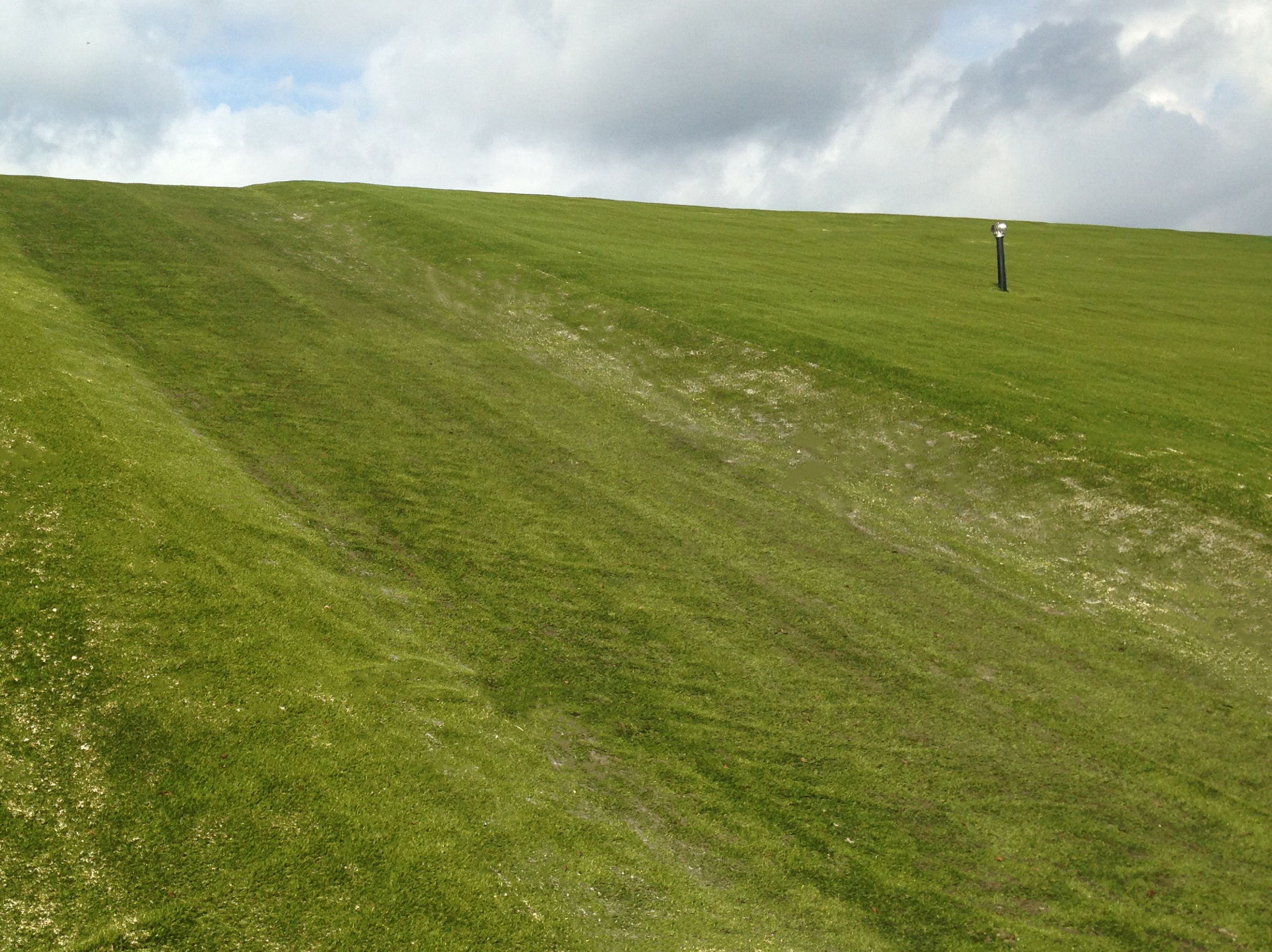 HydroTurf has been rigorously tested in a steady state overtop flume testing program at Colorado State University (CSU) in accordance with ASTM D-7277 Standard Test Method for Performance Testing of Articulated Concrete Block (ACB) Revetment Systems for Hydraulic Stability in Open Channel Flow. The testing program occurred over a 32-hour duration test period where the product was subjected to hydraulic jumps, impact and abrasion resistance from large debris, and intentional damage with no erosion or instabilities recorded.

The results of the test were analyzed in accordance with ASTM D 7276 – Standard Guide for Analysis and Interpretation of Test Data for Articulating Concrete Block (ACB) Revetment Systems in Open Channel Flow. Performance thresholds of the revetment technology could not be reached, but rather the test was terminated when the limits of the test facility were reached at a velocity of 8.9 m/s and accompanying shear stress of 43 kg/m2. No product damage or instabilities were recorded. 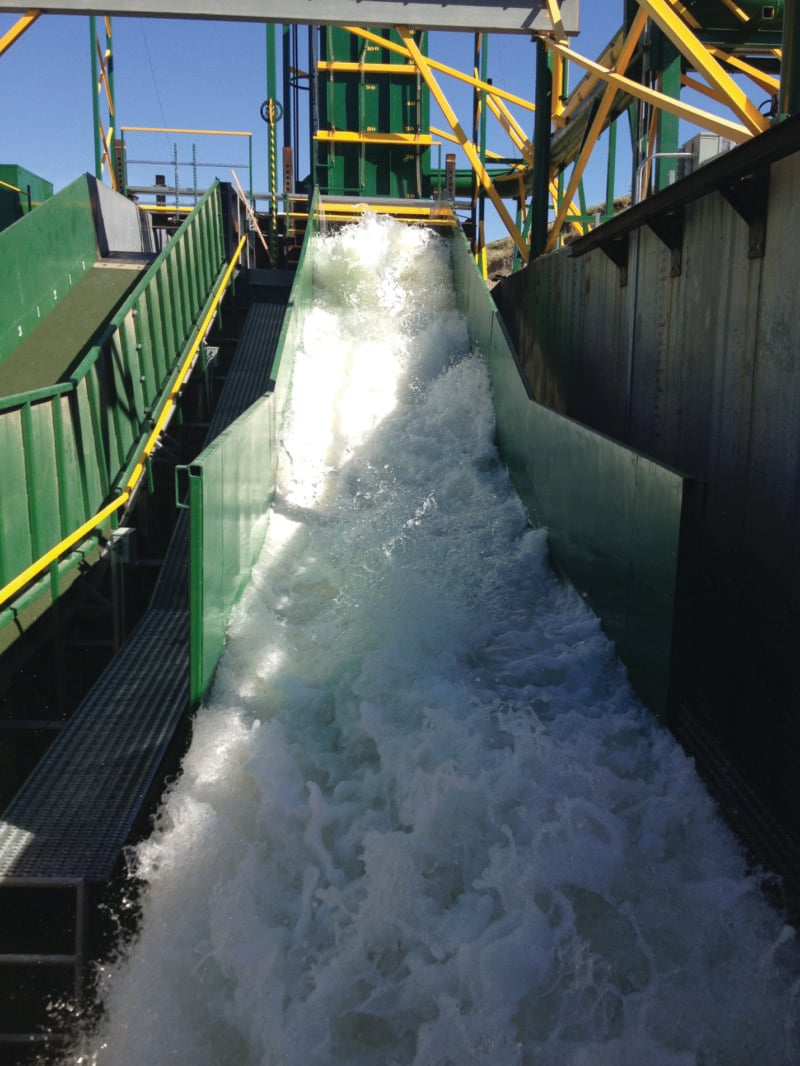 Because of the excellent hydraulic performance and results in steady state flow conditions, the product was also subjected to a separate wave overtopping test program at CSU.  This testing was developed for the United States Army Corp of Engineers to evaluate landward side erosion protection technologies available for use on levees in hurricane prone areas such as New Orleans, LA. The overtopping simulator at CSU is the largest in the world, and can model a generic 500-year event in New Orleans. A picture of the wave overtopping test can be seen in the picture to the right.

In summary, the product designed originally for use in waste containment applications outperformed all other technologies previously evaluated by CSU with the largest amount of cumulative overtopping volume on record with no failure. Other erosion control technologies evaluated by CSU include Lime Stabilized Soils, Articulated Concrete Block, and Turf Reinforcement Mats. 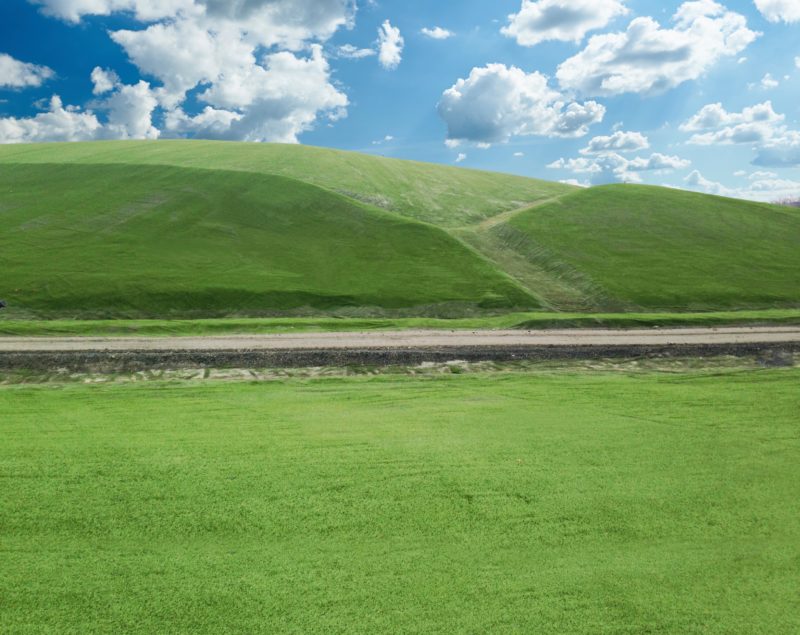