How ClosureTurf Can Cut Your Costs 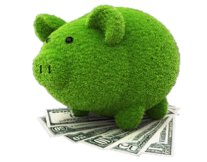 Cost savings, both short and long – term, can be recognized in several ways with ClosureTurf.

ClosureTurf allows an additional two feet of airspace because the soil layer is eliminated, if the landfill is permitted by the final cover top elevation. The value of the airspace can be realized in many ways, including additional income with the gained two-feet expansion, lower annual bonding obligations, lower the cost per ton of those bonding requirements and potentially receive a one-time significant credit to their financial bottom line.

With the benchless design approach, the following items can reduce overall costs:

Deep gas wells extending to within feet of the base liner were designed so that their expected radius of influence to collect gas would overlap. One aspect of a gas design not often discussed was that the “radius of influence” of each gas well was not a 2D object as drawn, but rather it was a 3D area of influence. The gas that migrated above the well screen and beyond the vertical radius of influence would certainly cause pressure to build on the final cover system. Deep gas wells also introduced many new problems. The change in temperature at ~200 feet deep versus the surface temperature caused large quantities of condensate. Condensate, simply stated, is instant leachate. Since the wells must be designed to allow the free flow of gas, they are prone to watering in both from the percolation of leachate and the creation of leachate as the deep well produces condensate. This is a major reason why deep wells must be replaced from time to time.  With the patented surficial gas management system   used in conjunction with ClosureTurf, landfill gas is collected without the expense of these deep wells, potentially eliminating or at least greatly reducing the need all together.

Borrow pits necessitate the destruction of land. ClosureTurf greatly reduces the destruction of native, undisturbed land that is only being destroyed to provide soil for a landfill cover. Eliminating the need for a borrow pit makes environmental as well as economic sense. Depending upon the proximity of borrow sources, soil can be a costly item to get on site. ClosureTurf eliminate this layer and reduces the need for construction vehicles to transport.

ClosureTurf makes it easy to install in small, incremental closures. This closure method reduces both fugitive emissions and the infiltration of leachate which provides significant savings for the owner.

The consistency offered by a standardized system such as ClosureTurf provides efficiencies that can be easily realized, from pre-design through construction. A significantly larger amount of closure acreage can be constructed using ClosureTurf than a traditional soil cover, effectively allowing more projects to be constructed with a given set of fixed resources. Typically, ClosureTurf installs 2 to 3 times faster than traditional covers.

The annual maintenance costs for ClosureTurf runs, on average, more than 90% lower than those for a traditional soil and vegetated cover system. The following is an example of a maintenance activity comparison.

The ClosureTurf Surficial Gas Collection System is designed to allow LFG to rise to the waste surface. The collection points across the surface which are integrated into the geomembrane component can relieve the gas actively or passively based on specific site needs and desires. This collection mechanism provides for an increased quantity of gas collected as well as an increase in quality of gas collected all because gas collection can be performed at the surface of a landfill. Surface collection also reduces potential oxygen intrusion through wells and supports a safer gas management system with much lower exposure to oxygen migration into the landfill.